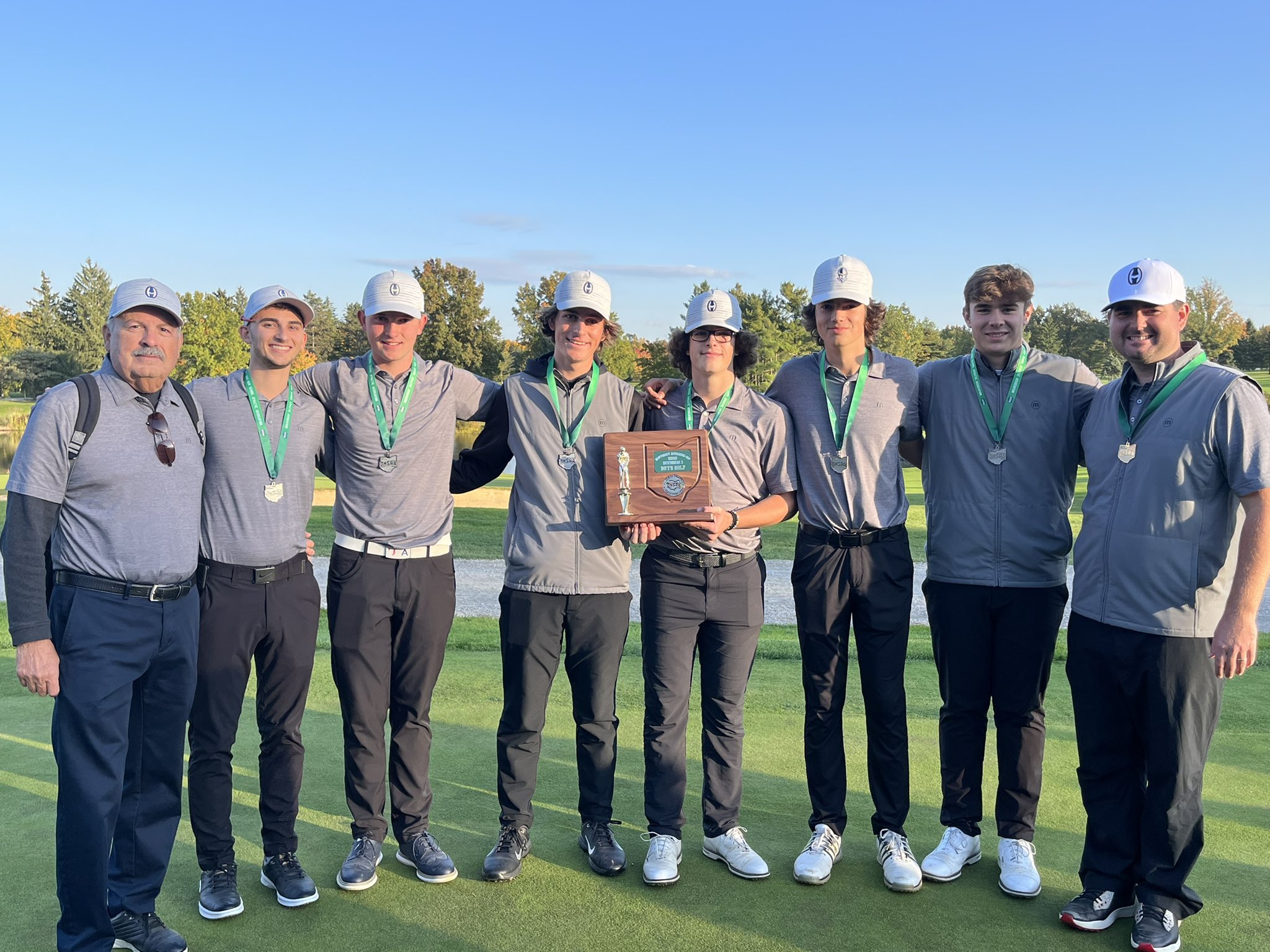 Last October, after a state championship in 2020, the Hoban Knights boys golf team fell short in their bid to repeat, losing by six strokes to Cleveland St. Ignatius.

“A lot of us were very, very frustrated coming off that golf course,” Vojtko said. “We all knew we left shots out there and made silly mistakes where we kind of just weren’t focused. We missed a couple short putts and they added up, which is why we lost.”

This weekend, the Knights will get their opportunity for redemption, as they compete in the Division I state golf tournament at the Ohio State University Scarlet Course in Columbus. The tournament takes place on Friday and Saturday, with 18 hole rounds each day. This is the fifth consecutive year that the Knights are in the state tournament. They finished as runner-up in 2019 and 2021, in addition to the state title in 2020.

Led by seniors Nolan Haynes and Jake Ryan, as well as junior Jack Vojtko, the Knights are as deep and experienced as any team in the state. Haynes and Ryan will be competing in their fourth state tournament. Vojtko has finished in the top four among all individuals in each of his first two state tournament appearances. Sophomores Chris Pollak and Ray Dress round out the Knights' lineup, with seniors David Deibel and Anthony Gore serving as alternates. All four seniors are team captains.

“Thinking back to my freshman year, we still have three guys from that state championship team,” Vojtko said.” We’ve had the experience and we know how to win there. We know where we’re going, where to hit all our practice shots. It’s not like we’re just showing up and going to play a practice round and playing 18 holes. We know what we’re doing.”

The 7,100 yard, par 71 Scarlet Course will provide a difficult test for all of the teams, and the Knights are well-versed in the challenges the course will present.

“It’s fairly unique,” Haynes said. “It has really deep bunkers everywhere and the bunkers are really long. If you miss the fairway, you’re more than likely in a bunker.”

All of the players noted the importance of being in position off the tee, missing in the proper spots on the greens, and relying on their short game.

“You have to be very strategic with what you hit off the tees,” Vojtko said. You have to know which side of the fairway you’re trying to hit. With how big and sloped those greens are, you have to make sure you miss in the right spots and leave yourself a good look at birdie, not where if you hit a bad shot you’re looking at double in the face. You have to minimize the big numbers and play smart shots.”

“This week I’m just trying to fine tune everything, not really make any drastic changes,” Ryan added. “The big thing I’m focusing on is chipping around the greens. I’ve learned that is very useful down there.”

Parker believes his team is peaking at the right time and the players are in the right frame of mind to go play their best this weekend.

“Everyone has their own routine and what they want to work on going into a big tournament,” he said. “Golf is a mentally intense sport, it’s been a lot about clearing your head. We’ve talked about some of the fears we have going into this week and addressed those. Ultimately it’s about emphasizing one shot at a time and staying in the moment. I think that is why we have been one of the better teams at closing out tournaments.”

The weather looks good in Columbus this weekend, which is not always the case for this tournament. Even if the wind picks up and scoring conditions are difficult, Parker is confident it will give the Knights an advantage.

“We had a big emphasis to play the best courses all year to prepare for this tournament,” Parker said. “I think it helps us the tougher the course is.”

Hoban and St. Ignatius headline the talented 16-team field, and many of the schools have played against each other at other tournaments throughout the season. For the Knights and the Wildcats, this can be seen as the rubber match of a three-year battle for state golf supremacy.

The Knights begin play at 9 a.m. on Friday. Information about tickets and live scoring can be found here. 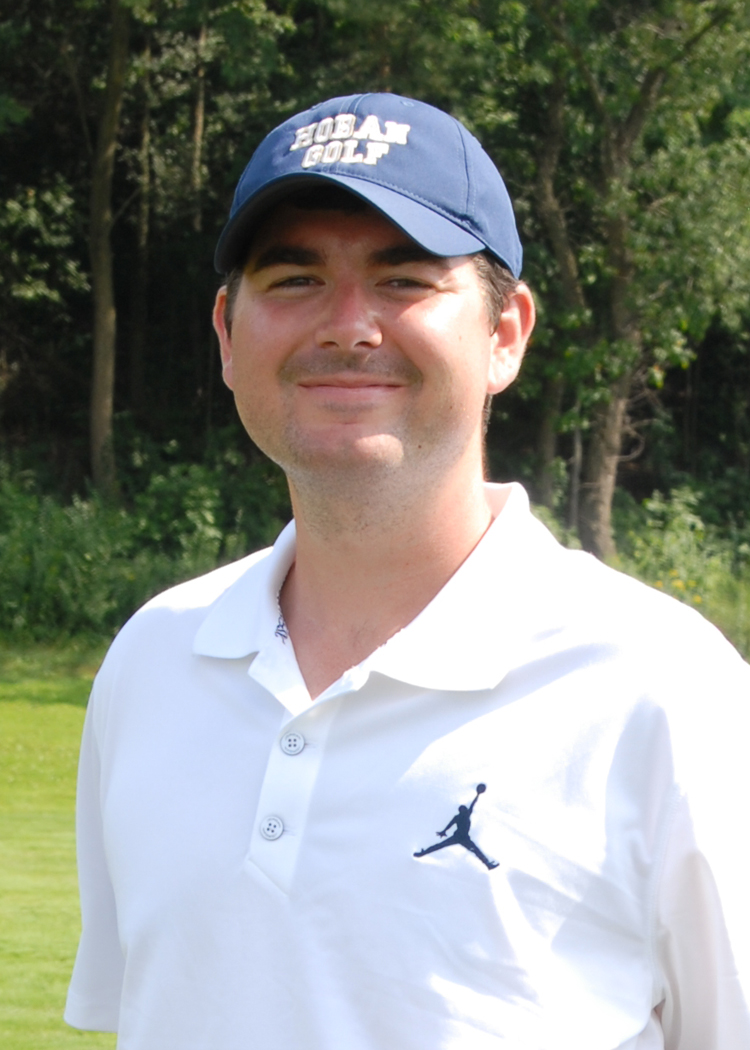 Quinn Parker is in his 10th year as a Boys Golf Coach at Archbishop Hoban High School (8 years as Varsity Head Coach). The golf team has qualified for the district tournament five straight years: 2016, 2017 2018 (Sectional Champs), 2019 (Sectional Champs), and 2020 (Sectional Champs). The team advanced to the state championship three straight years: 2018 (District Runner-up), 2019 (District Runner-up) and 2020 (District Champs). The Team Won Division I State Championship in 2020 (Division I State Scoring Record on the Scarlet Golf Course: 606). 2019 the team finished Division I State Runner-up (Dublin Jerome State Champs), and in 2018 the team finished in 6th place for Division I. The team also set a State Record for lowest team score with 272 at Archbishop Hoban Invitational at Portage Country Club ( 272 , 8 under par Sept. 8, 2020).

Parker received a Bachelor of Arts degree in business administration from Malone University, with a minor in economics. At Malone, he played golf for four years with four medalist wins: Phipps Memorial (2007), Lakeland College ('09), Notre Dame College ('09) and Red Poling ('10). He was an NAIA Academic All-American in 2011 and an NCCAA Academic All-American in 2010.