In Week 10 of the 2015 season, a 9-0 Archbishop Hoban team traveled to Benedictine for a matchup between two of the top teams in Ohio. The Knights lost by 21 points.

Three weeks later, Hoban faced St. Vincent-St. Mary in a rematch of a regular season meeting won by the Knights. The game was played at InfoCision Stadium on the campus of the University of Akron. The Knights defeated the Irish, 24-21, and two more victories earned them their first state championship in football.

The 2022 Knights won their first nine games, including a 28-14 triumph over STVM. In Week 10, Hoban lost by 21 points to St. Edward, the state’s top-ranked team in Division I.

Three weeks later, the Knights (11-1) and the Irish (8-3) will meet once again in a regional semifinal at InfoCision Stadium on Friday night at 7 p.m. This is their third playoff meeting, with the others coming in 2015 and 2016. In both of those years, Hoban defeated STVM in the regular season and in the playoffs at InfoCision Stadium, en route to a state championship.

This is the 49th all-time meeting between the two rivals, and the 14th at InfoCision Stadium. Hoban leads the series, 27-21. They have won ten straight games against the Irish.

STVM advanced to the regional semifinals by scoring with less than a minute remaining to defeat Austintown-Fitch last week, 21-14. They played the Knights very competitively in Week 8 despite six turnovers. The game was scoreless into the third quarter, and Hoban did not put the game away until the final minute.

The Irish responded by pounding an unbeaten Cleveland Heights team the following week, 49-21.

“They play a really physical style of football,” Hoban head coach Tim Tyrrell said of the Irish. “They have a strong senior class and they are re-energized with a new coach.”

The Knights bring plenty of physicality themselves, with a strong offensive line leading the way for senior running back Lamar Sperling. The Mr. Football candidate averages 221 rushing yards per game and has scored 41 touchdowns on the ground. Sperling has been even better in the postseason, totaling 569 rushing yards and 10 touchdowns in Hoban’s two playoff wins.

That rushing attack will be critical in a game that is likely to be played in a steady rain.

“As cliché as it sounds in a game like this, especially with the weather, we can’t turn the football over,” Tyrrell said. “This is November in northeast Ohio, and most of the kids on our team have played in the playoffs. They’ve played in snowstorms and bitter cold, rainstorms, and everything. So this shouldn’t be something that bothers us.”

Tyrrell felt some humility was needed for the Knights after their 9-0 start, and they got a big dose of it in their 41-20 loss at St. Edward to end the regular season. Since then, Hoban has handled two playoff opponents with ease, but Tyrrell and his players know a different type of challenge awaits them against STVM.

“I think, in a rivalry game, both teams kind of play above their level,” Tyrrell said. “I think the hype got to us and we wanted it a little bit too much the first time around. I think this time we will be more focused, not trying to get outside the box, each kid doing what his job is. We try to narrow things down when we hit the playoffs and focus on what we have done well the first ten weeks.

“Anytime you play St. V, even though we’ve had the upper hand lately, it’s still a 50/50 game. We have to go out and play and we’ll see what happens.” 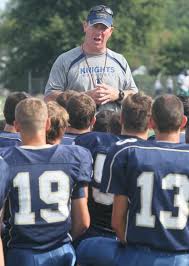 Tim Tyrrell, in his sixth year as head football coach at Hoban, finished the 2018 season with a fourth straight state championship. His record at Hoban is 68 wins, 12 losses. His overall career record is 130 wins, 63 losses. He is Hoban's athletic director.

A Youngstown native, Tyrrell graduated from Ursuline High School and Youngstown State University with a Bachelor's of Business Administration degree. He was a member of the Youngstown State’s Division I-AA National Championship teams in 1993, 1994 and 1997.

Previously, Tyrrell has been head coach of Chaminade-Madonna College Preparatory School in Hollywood, Fla., where he amassed a 39-18 record over five seasons. In just his second season at Chaminade-Madonna, the team finished with 12-1 record and reached the state semifinal in Class 2B. He was named “South Florida Coach of the Year” by the Miami Herald and South Florida Sun Sentinel in 2009 and District Coach of the Year in 2009, 2011 and 2012.

Prior to coaching in Florida, Tyrrell was head coach at St. Thomas Aquinas in Louisville for six seasons and spent a year as offensive coordinator immediately preceding that. He also had experience as the tight ends/tackles coach from 1998 to 2001 at Youngstown State, where he spent time on staff with Jim Tressel, former head coach of Ohio State University.